H. pylori has become one of the most common infections in the world and in about half of Israel’s population, in developing countries the percentage of infections can reach 70% or more.
The bacterium multiplies and spreads quickly and can enter the human body in various ways. Through dirty hands, kiss, polluted water. (H. pylori) is the leading cause of chronic gastritis, gastric ulcer, duodenal ulcer, and even gastric cancer. 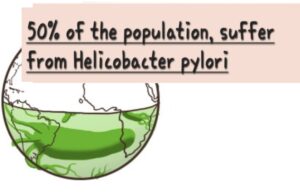 Such facts raise serious concern in the medical world. And today, hospitals in Israel offer the only method for the treatment of 4 types of antibiotics that need to be taken in parallel for two weeks.
Often, such aggressive treatment causes serious side effects in patients, especially if the treatment has to be repeated several times.

But few know that in herbal medicine there is a strong and harmless alternative way for the body, to destroy bacteria and restore the digestive system to normal function. But in the search for a natural treatment for Helicobacter, even on the Internet, we find the main thing diets, probiotics or propolis, oregano, etc. Following my work with patients and customers in health food stores, I recognized that there was a lack of a product with a complete and effective response. 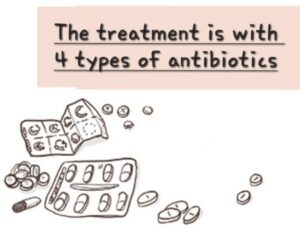 So I decided to make a herbal formula called HELICOOL and it is made up of powerful herbs that fight Helicobacter pylori and for some reason only a little is known about them. For centuries and new studies have found that the active ingredients in them have strong healing properties that fight Helicobacter pylori and other digestive problems. In light of the success of HELICOOL in a large number of patients, I decided to manufacture it with the supervision of the Ministry of Health and in larger quantities. I will list some of the plants in HELICOOL

For thousands of years, flaodendron bark has been used in Chinese medicine to treat dysentery and cirrhosis of the liver. Studies in China show a widespread antibiotic effect against bacteria that cause dysentery, typhoid fever, Staphylococcus aureus, pneumonia, conjunctivitis, trachoma and meningitis. The plant also effectively fights candida and vaginal fungus, helping to reduce weight and lower cholesterol and blood sugar.

Included in 50 main herbs in traditional Chinese medicine. The plant has been used to treat gastrointestinal problems for 3000 years. The Coptis plant contains berberine alkaloids and has strong antibacterial, anti-inflammatory and antifungal properties. In herbal medicine, Coptis chinensis has been used for centuries to treat intestinal infections as well as fungal infections. Due to the high content of antioxidants, Coptis chinensis provides properties that protect the stomach, improves digestion and also normalizes and restores liver activity, treats intestinal worms and eliminates toxins.

Familiar to many as the black licorice candy. Recent studies in 2013 have found the healing properties of licorice root against Helicobacter pylori. Licorice root acts as a natural antacid and relieves reflux, acid, heartburn and indigestion. Active root chemicals are used as alternatives to bismuth and play a protective role against acid secretion. Also covered the mucus-infected areas and contributed to the release of mucus. Thus, glycyrrhiza glabra is used to strengthen the digestive system and promotes gastrointestinal regeneration.

It is a plant from North East America. The inner fruit peel has long been used in traditional Native American medicine to treat wounds and gastrointestinal diseases. The elm contains soluble fibers that are mucous that cover the mucous layer in the digestive tract, analgesic and inflammation.
Ulum Rovera has an anti-inflammatory effect, softens and disinfects the gastrointestinal tract, treats ulcers and intestinal infections.

I have published just a few of the healing properties of plants that have been scientifically proven to be effective for Helicobacter. In light of the information I have revealed, the decision as to which treatment method to choose, is yours.

If there are any questions or desire to delve deeper into the subject, you can consult for free, call me at the number  +972522739202 viber – whatsapp – https://www.instagram.com/shamanclinic/